The Official Home of Daniel Abraham, James S. A. Corey, and M.L.N. Hanover

Lizard Brain is a shared blog about Science Fiction and Fantasy from Daniel Abraham and Ty Franck.

How I became a freak 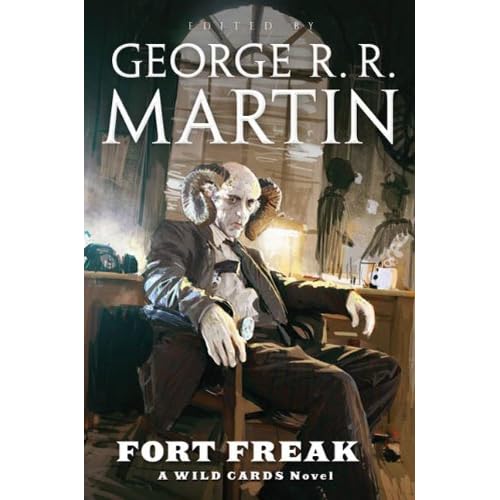 So about year ago, a good friend of mine named Victor Milan tried his very best to die of a raging infection in the lungs.  I’m happy to report he failed in this endeavor.  In fact, because he now is healthier than he was for probably a decade prior to the incident, I can call his failure utter and all encompassing.  He did the exact opposite of die: he got much, much healthier instead.

But enough of Mr. Milan’s failures.  Let’s talk about me instead.

While Vic was still in the throws of his lung related woes, I was called into the office by my boss, George.  The editor of the Wild Cards series.  He said (I paraphrase), “Vic is supposed to write a story for Fort Freak, but is instead trying to die.  He delivered a first draft of the story before going into the hospital to have his chest hacked open, but it will require some rewriting to fit into the book.  Since the doctors won’t let us drag a laptop into Vic’s oxygen tent, what would you think of helping out?”

I was pretty hesitant at first.  I had thought my contribution to Wild Cards had ended with my creation of the character Tinkerbill.  I was satisfied with the mark I had left.  I wasn’t sure if I wanted to join the madhouse that writing an actual Wild Cards story was rumored to be.  In addition, Vic was a friend of mine.  And you don’t just jump in and rewrite your friend’s story willy nilly.  Stories are like children.  I wouldn’t just take it on myself to rewrite the DNA of a friend’s child.  Unless it gave them superpowers.  But it’s still something you have to think carefully about.

George, and his trusty sidekick Melinda Snodgrass were pretty insistent that it be me.  They flattered me by saying that I write fast, and they needed it post haste.  They said that I was a good collaborator, so they didn’t worry that I’d be able to work with Vic’s first draft.   Melinda went so far as to visit Vic and ask if it was ok if I did the rewrites.  He said yes, though he was probably high as a kite on morphine at the time, so I think he had diminished capacity.  Mostly though, all of this flattery boiled down to, “We need this right now, and you’re sitting here, so you should do it.”

They finally wore me down.

And so my adventure with Wild Cards began.  I rewrote Vic’s first draft based on George’s notes to Vic.  I turned it in.  George said, “This is all well and good, but in the month or so since I gave Vic these notes, my needs have changed.  Do this instead.”

I rewrote it again, based on the new stuff.  Then George realized that someone in another story had used a character that no one else had used.  So, he wanted another appearance for that character.  Who was still writing their story and could be compelled to add this new character?  If you guessed anyone but me, you are wrong.  So I rewrote and added a scene for the new character.

Then George realized that Vic’s/my story worked better spread out across three months rather than happening in a few days.  I rewrote it again to break it into first three, then later four chunks that could be spread throughout the book.  Cherie Priest had written a brilliant interstitial for the book (that’s her guy Ramshead up there on the cover), but like a true professional, she was done.  She’d turned her damn story in and moved on.  So by scattering Vic’s/my story across the book, George had sort of bought himself a second interstitial in which he could add all of the bits he wanted to mesh with the other stories.  So I rewrote, and rewrote, and effing rewrote.

I spent a week at a writer’s retreat doing nothing but rewriting until 3am every night.

And then, one blissful afternoon after I’d email George the five thousandth iteration of the story, he called and said, “Yeah, this is pretty good.  I think this will work. . .”  I don’t know what else he might have been about to say, because I immediately turned my cell phone off and went to drink a lot with Jen Volant, which I can not recommend enough.  Drinking with her, I mean.

So, in the end, after a last minute assignment to aid a dying friend and about five million rewrites of the same damn story, was it worth it?

Fuck yeah.  I loved what we wound up with, Vic and I.  And, quite flatteringly, he likes it too.  It’s a nice little story, and our styles seemed to mesh pretty well.  I’m proud of what’s on the page.  And Fort Freak is a pretty damn good book, and I’m happy to be a part of it.  You should read it, unless you already have, in which case good job.

Will I ever do it again?  Dunno.  I’ll have to see who tries to die next.

Find out more at syfy.com